Recently, Block8 submitted a Response to Treasury’s Issues Paper on the Future Direction of the Consumer Data Right. Below is an excerpt from that Response outlining the differences between the current implementation that uses APIs between businesses, and a Distributed Ledger Technology (DLT) enabled model, which uses smart contracts between businesses.

In Figure 1 below, we illustrate the current Consumer Data Right (CDR) model. A multi-step process is required for a Consumer to form a commercial relationship with a new provider and access their data.

Figure 1: Conceptual model of the current implementation of the Consumer Data Right. A consent-based model is used to push data between centralised systems using APIs.

From an information management perspective, this message-based (API-based) design pattern presents us with a familiar set of issues:

Figure 2 below illustrates a concept for a CDR 2.0. By leveraging a decentralised architecture, we can use smart contracts to share the programming that operates the agreement between the consumer and the company. The operation of this shared program generates a history of transaction data, and this is also recorded on the ledger that is distributed between the parties. And our “Consumer” becomes a “Prosumer”.

In this way, a distributed ledger can be used as the basis for managing the “truth” of what occurs (to the extent that is possible given the reliance on inputs from external sources) such that both the consumer and the company are always in agreement with - and always have access to - the data pertaining to their commercial relationship.

In the context of Open Banking, this would mean the defined data sets for transaction and lending accounts would be appended-to using a distributed ledger system that is operated between the consumer and their bank. The mechanism of keeping the databases synchronised is called consensus, and the shared program that is used to operate that relationship is called a smart contract.

In an initial implementation, a smart contract would only involve the basic fundamental operations of the specific product being offered by the company. The key difference is that the source of truth relating to the history of that account is the shared system of record (distributed ledger). Not all functions of a given financial product may necessitate being codified into a smart contract. Initially, only the basic function for recording transaction history would be required in order to bring the system to feature parity with CDR 1.0; the company offering the product would need to refer to this ledger as the source of truth for integrating into their downstream systems. In the future, from this baseline, the smart contract can expand to incorporate more functions in the financial product stack, such as identity, authorisation, and payments.

The data schemas for these products would require standardisation. Fortunately, this is work that has significant overlap with the CDR 1.0 specifications undertaken by the Data Standards Body led by Data61. These schemas now conveniently form a basis for developing smart-contract-based transaction and lending products that will enjoy full solubility between participating financial services companies. In the same way that Australian mobile phone numbers were disassociated from telecommunication companies to provide consumer data portability, the same can be achieved with simple financial products, with more sophistication and functionality added over time.

We also note the immense portability benefits of cloud-based services and the associated common recovery patterns for forgotten credentials or lost or destroyed hardware. The tradeoff between control and convenience has manifested for most as full trust (i.e. no control or transparency in current approaches) and full convenience, as our digital lives are entirely stored on remote servers managed by others.

Our consumer-centric model however does not relinquish convenience, but it does recognise the need for introducing a reliable data custody layer as shown in Figure 3 below.

DLT remains to keep data completely synchronised, but there is a convenience services layer that operates on behalf of the Prosumer. This is a critical distinction, as previously these sorts of tools of convenience could only be offered by the company itself, meaning the market for these tools was a market-of-one, and there was extremely limited opportunity for third party innovation.

These data custodians - businesses working on behalf of the Prosumer - were envisioned in the Open Banking Review: “[The CDR] should provide a framework from which new ideas and business can emerge and grow, establishing a vibrant and creative data sector that supports better services enhanced by personalised data.”[1]

Block8 anticipates that these new businesses will specialise not only in the management of economic data, but also the economic identities of Prosumers as they connect and disconnect from service providers with more frequency (liquidity) than ever before. These companies would also be able to enforce standards with connected businesses on behalf of Prosumers. Furthermore, the opportunity to provide a full view of the Prosumer’s economic profile across industries, including financial services, telecommunications and energy, but also ultimately other key functions such as employment agreements, government licencing, rights and status, is extremely compelling. Block8 sees a future where companies within this industry continuously compete by innovating both on their user experience as well as their ability to interface to the greatest number of well-featured connected businesses.

By truly shifting the consumer to the centre of our information systems, we can reforge our core economic and civic processes to be far more efficient and maximally consumer-centric.

[1] Review into Open Banking, The Australian Government the Treasury, December 2017 (“The Farrell Report”)

Download our full Response to Treasury’s issues paper to find out more about how DLT can be used for B-to-B data sharing under the Consumer Data Right. 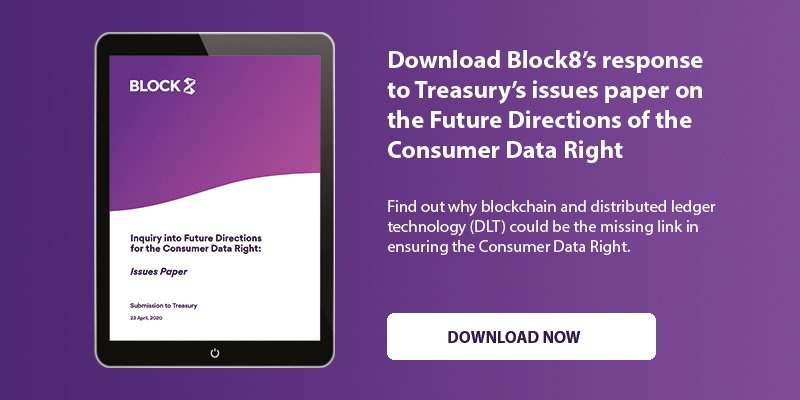 Block8 would be happy to further discuss our thinking on any of the topics covered above, including specific detail on solution architectures and demonstrations of currently working distributed ledger systems developed to address the challenges and opportunities outlined in the Issues Paper and our Response.

Our experts are also available to assist with research mapping the value chains for centralised and decentralised approaches, the identification of the highest-value areas for a consumer-centric data infrastructure, or working with the Government and other members of industry in the development of pilot programs.

Samuel Brooks is an expert in connecting next-gen technology with current-gen business problems, with particular specialisation in the development of distributed ledger systems, having designed many DLT-based solutions and authored and contributed to multiple public submissions from both industry and government.

He is also an active member of the Australian blockchain community, including regularly speaking at technology conferences, meetups and podcasts, and contributing to industry and International Standards committees.

Samuel holds a degree in Electrical Engineering from UNSW and has been working hands-on with blockchains since 2014.

Get the latest news on our products or learn what's happening in our guilds.